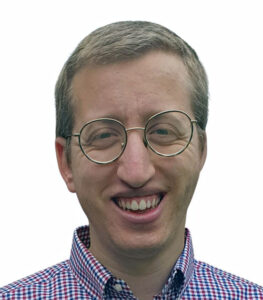 His CV includes work as a Cognitive Behavioural Therapist for Hertfordshire Partnership NHS Foundation Trust and he also has experience in Alcohol and Substance Misuse.

A published author in religious and secular fields, Rabbi Golker co-authored the two-volume Journey Through Nach books, sold in Jewish bookstores internationally. He has published research papers and articles about the cultural adaptation of therapy for the Orthodox Jewish community, his main area of academic interest.

For the past four years, Rabbi Golker, our cheder Head Teacher, has overseen the continued growth and development of the cheder, in addition to teaching the Religious Studies GCSE course.

He was recently awarded Semicha, the Rabbinic qualification, by Dayan Gelley, Head of the London Beis Din, after a course of study at the Rabbinic Training Academy, a leadership and training program for newly qualified Rabbinic couples.

The selection of Rabbi Golker in the summer of 2022 was an emphatic win-win. He wanted to be the rabbi of Richmond Synagogue, and the shul wanted him—already familiar to many members of the community as the head of the cheder—as their rabbi.

Rebbetzen Gila also grew up in North West London and was educated at Menorah and Hasmonean High Schools. After studying at Michlalah seminary in Jerusalem, she gained a first class BSc in Maths at University College London and then achieved a qualification in Psychotherapy and Counselling at Regents University. She was an Informal Educator at JFS School and Gesher Youth Outreach, and in the Mental Health field at Noa Girls.

Rebbetzen Gila is currently (mid-2022) completing her second year of a two-year part-time Postgraduate Diploma in Cognitive Behavioural Therapy at Hertfordshire University and is on a work placement with Hertfordshire Partnership NHS Foundation Trust.

Together with Chaim, she attended the Rabbinic Training Academy program. They have a young son, Dovid.