A History of Richmond Synagogue

They married off their children to each other and the area became a playground for them and was regarded as a local social phenomenon. The first was Solomon Medina, holder of many army contracts, knighted in 1700, after entertaining the King to dinner at his home by the Bridge the year before.

Moses Hart, who founded Duke St Shul, the first Ashkenazi Shul after the resettlement, lived here. His brother was the Chief Rabbi and another major personality, Judith Levy, known as the Queen of Richmond Green threw lavish parties at her home on the Green. A woman of great wealth, she largely funded Duke St Shul. All took advantage of Richmond as a spa town on the Terrace Gardens, to make their way in high society. Disraeli, on visiting the Austrian statesman Metternich at his home off the Green, said “I am enchanted by Richmond Green and I should like to let my house and live there.”

Another area resident was Benjamin Goldsmith, who had a 150 acre estate in Roehampton, where he entertained both the King and his close friend, Admiral Nelson. His farm produced corn to make matzot for the Chief Rabbi.

There were no Shuls in Richmond as the Sephardi and Ashkenazi authorities felt it was too far away from the Synagogues under their auspices. However, there was probably some informal worship.

Most fascinating of all, in 1840, a Mr Neumegen set up a private school in Kew on what is now the site of Gloucester House, for the children of the Sephardi aristocracy which lasted until the early years of the 20th century 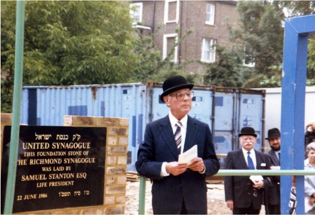 When the spa on the Terrace Gardens fell into disrepute, the exotic merchants who made up the Jewish community, largely returned to their City homes and the central London Synagogues.

They were replaced towards the end of the 19th century by non-aristocratic Jewish traders, who opened shops. The social make up changed.

In 1912, the Jewish Chronicle reported that Arthur Howitt set up an Arts and Lit society for the Jews in the area, and they met in his hotel, the Castle Assembly Rooms. A very colourful East End character, originally from Poland, he made and lost several fortunes and was exceptionally generous to local charities. He paid for 6,000 East End children to visit Epping Forest and in Richmond, entertained 500 pensioners to tea at his hotel and gave each a half pound of tea. He became Mayor and as he was a widower, the Mayoress was his 12 year old daughter.

The United Synagogue, founded in 1870, refused to allow a Shul to be built, for the same reasons as given 100 years previously, ie it was too far away from the central London base. In his memoir, Howitt described how he argued with the US and eventually approval was given.

In 1915, Rosh Hashonah services, attended by 50 worshippers, were held in Parkshott. The building was purchased and converted in 1916 for 130 men and 30 women and formally opened by Chief Rabbi Hertz and Leopold de Rothschild, President of the US. Rev Goodman was appointed as Minister, having moved from Bristol Synagogue. It was the first Shul in the Richmond area although a Shul briefly operated in Kew in 1905. It is interesting to note this was seventeen years earlier than the first Shul in Golders Green, which opened in 1922.

It was a brave move, given the major events taking place across the world in 2016/17.  The Gallipoli campaign was a disaster; the battle of Somme was in progress, where ultimately, 1m men died or were wounded, including 57,000 on the first day; the battle of Jutland took place; General Kitchener died off the Orkneys; the Easter Rising began in Ireland. The Russian Revolution and the Balfour declaration both took place in 1917.

However, the birth of our Shul was momentous for us. In 1922, Rabbi Dr Ginsberg was appointed Rabbi and stayed until 1961. Unusually at the time, he had both a Yeshivah and University education and was a highly regarded Talmudic scholar with several publications to his name. During his time, the Cheder reached 100 pupils and after WW2, Kingston, which had originally been part of Richmond’s congregation, set up independently.

In 1938, the Shul moved to what was a former non-conformist Chapel on Sheen Road, a move largely promoted by Hyman Appleby Leon, who opened a shop in Richmond after falling in love with it whilst travelling through on the bus. He is the only person to have been Mayor three times and later became Warden of the New West End Synagogue. It was again opened by Chief Rabbi Hertz and Rabbi Dr Ginsberg.

In 1987, we moved to our current home, following an advantageous planning deal with the Council and Waitrose, which resulted in the construction of a purpose built Shul with hall, kitchen, classrooms and grounds. 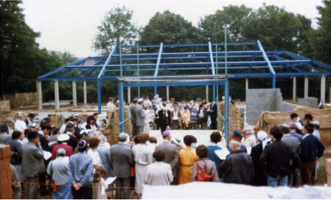 Our Lichfield Gardens site had previously been a bungalow, small holding and orchard, owned by a Jewish family, the Solniks, who made their garden available for Shul garden parties.

The new Shul was opened by Chief Rabbi Jacobovits and the then Minister, Rabbi Moshe Baron. Richard Savinson, later President of the Shul, chaired the Building Committee and the negotiations were led by Maurice Fireman and Michael Clein. At the time, Eldred Tabachnik QC was the senior warden. The Rabbi’s house was built on the car park in 1990s – a great asset. 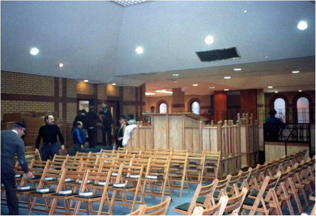 We are now led by Rabbi Meir Shindler, who joined in February 2016. We continue to welcome Jews of all levels of observance to our friendly and traditional services and their children to our vibrant Cheder.

In 2018, Rabbi Shindler created the Richmond Jewish Community Hub (RJCH) to provide cultural and social programmes for members, non-members and people from other SW London Shuls run by Iryna Mushkina, our Administrator/Events Coordinator, thus complementing the religious services provided by the Shul.

Long may we continue to prosper.